Using the state insignia and emblems

The department assesses applications for the use of state insignia including the South Australian badge and coat of arms.

Under the Unauthorised Documents Act 1916, no one can print, publish or manufacture the symbols without permission, and they cannot be used for commercial purposes. 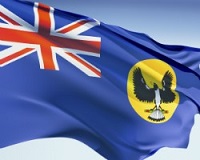 The State Flag, which is flown from government buildings and vessels, was authorised by proclamation on 13 January 1904. It comprises the Blue Ensign, which is the Union Jack in the top left corner (canton) and the blue background, with the State Badge in the fly (area farthest from the flag pole). 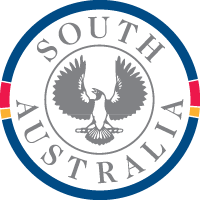 The State Badge is described heraldically as:

the Rising Sun Or (gold) with thereon an Australian Piping Shrike displayed proper, and standing on a staff of a gum tree raguly (bough), gules (red) and vert (green)

The colours can be used by individuals or organisations without permission. The State Coat of Arms, conferred in a proclamation gazetted on 19 April 1984, replaces an earlier Coat of Arms conferred by King Edward VIII in 1936.

The Armorial Bearings are described heraldically as:

for Arms, Azure on the rising sun depicted as a roundel or an Australian Piping Shrike displayed and standing on the staff of a Gum Tree proper and for the Crest on a wreath or Azure and Gules Four sprigs of Sturt's Desert Pea proper the Shield upon a Compartment comprising a grassy mount and in front of two Vines growing therefrom each entwining their stakes proper on either side thereof stalks of Wheat and Barley and the dexter side scattered with Citrus Fruits and lying on the sinister side two Cog Wheels with between them a Miner's Pick also proper together with on a Scroll the name "South Australia ".

Please contact our Protocol Unit for further information about the use of state insignia.

Department of the Premier and Cabinet
https://www.dpc.sa.gov.au/responsibilities/state-protocols-acknowledgements/using-the-state-insignia-and-emblems
30 Jan 2023 12:06 am