Overview: about the agency

As a central agency of the South Australian Public Sector, the Department of the Premier and Cabinet (DPC) provides a unique advisory role and whole of government perspective to priority issues for the Premier and the Cabinet.

We work in partnership and collaborate with public sector agencies to ensure integrated approaches to policy, projects and program delivery.

The public sector values underpin everything we do:

Our functions, objectives and deliverables

Further information about our functions and responsibilities is available on our website.

The organisational chart reflects the structure of the agency as at 30 June 2020. 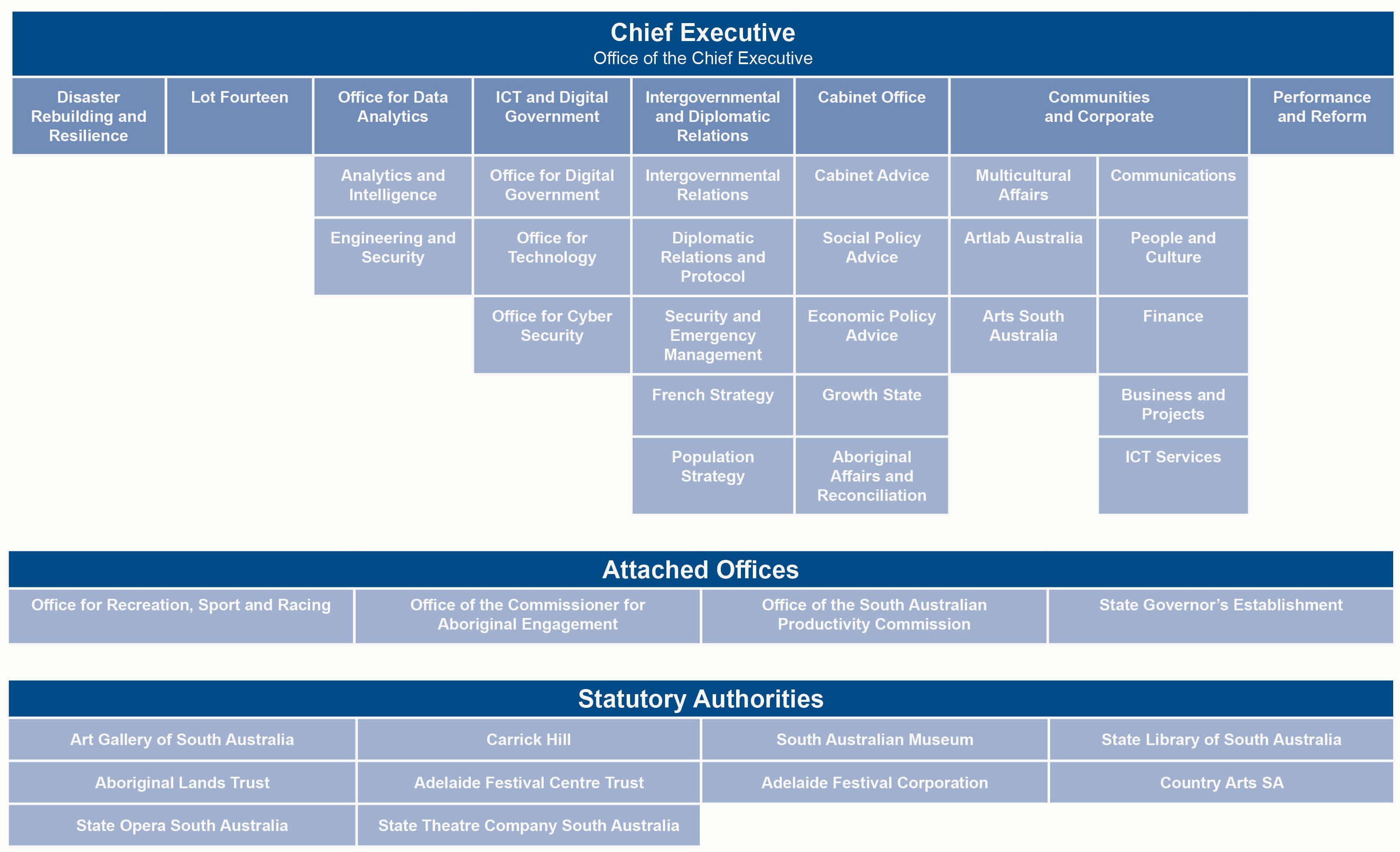 The Department of the Premier and Cabinet comprises of the following divisions:

Changes to the agency

During 2019-2020 there were the following changes to the agency’s structure and objectives as a result of internal reviews or machinery of government changes.

On 1 April 2020, the Performance and Reform unit was established. The unit sits within DPC and reports to the Chief Executive, DPC.

Mr Mark Duffy was appointed to lead the Performance and Reform.

The unit will work with agencies across government to develop an integrated performance framework and to lead a program of work to refine the accountability of the South Australian Public Sector (SAPS).

In addition, the Performance and Reform unit is responsible for providing secretariat support to the newly-established Executive Committee. The Executive Committee held their first meeting on 19 June 2020 and is the primary executive level decision-making body for the South Australian Public Sector.

The Disaster Rebuilding and Resilience unit (DRR) was established in recognition of the scale and complexity of the 2019-2020 bushfires. On 15 January 2020, Ms Margot Forster was appointed as the State Lead responsible for this unit. The State Lead reports to the Premier through the Chief Executive, DPC. In late March, the appointment was extended to include the role of State Recovery Coordinator – Bushfires.

The unit’s functions are to provide a single point of coordination to oversee the state government recovery and rebuilding response in support of fire affected communities, including:

Offices transferred out of DPC

The Premier is supported by the Department for the Premier and Cabinet.

In addition to this the Premier is responsible for Aboriginal Affairs and Reconciliation, the Arts, Multicultural Affairs, Defence and Space Industries, Veterans’ Affairs and Tourism.

As at 30 June 2020, the department’s Executive Leadership Team comprised:

Legislation administered by the agency

The following are Acts committed to the Premier:

Other related agencies (within the Minister’s area/s of responsibility)

The following offices are attached to, and supported by, DPC.

Office of the Commissioner for Aboriginal Engagement

Established in 2007, the Office of the Commissioner for Aboriginal Engagement is a primary point of contact for the Aboriginal community to express their concerns about issues that matter to them and have those concerns and issues addressed.

The SAPC is led by Chief Executive, Dr Matthew Butlin, and reports to the Premier.

The SAPC is producing an independent Annual Report for 2019-2020, accessible via their website.

Office for Recreation, Sport and Racing

The ORSR leads the government's policy on sport and active recreation. It develops stronger, healthier and safer communities through active sport and recreation policy, programs, services, infrastructure and elite pathways. It also provides strategic policy advice to the Minister on matters relating to the South Australian racing industry.

The ORSR is producing an independent Annual Report for 2019-2020, accessible via their website.

Statutory authorities attached to the department

All statutory authorities attached to the department are producing independent Annual Reports for 2019-2020, accessible via their websites.

Department of the Premier and Cabinet
https://www.dpc.sa.gov.au/resources-and-publications/annual-reports/2019-20-annual-report/overview-about-the-agency
21 Jan 2022 12:12 am